Tucked away at the edge of a neighborhood on Daniel Island, where land stops and creek and marsh take over, sits a small nature preserve beloved by members of the community. Bellinger Island, named for Edmond Bellinger, a landowner on Daniel Island who supported American Independence in the 1770’s and 1780’s, is just under two and a half acres. Bellinger Island has long been a place for Daniel Islanders and their guests to take in the Lowcountry’s beautiful natural splendor. Pristine marshlands, a winding tidal creek, a lush wooded glen of oaks and pines, walking trails, and spectacular sunsets are just a few of the many things you can enjoy there. But some residents of Daniel Island started to notice something else about the island. It was eroding, losing about a foot a year to Beresford Creek, which runs along one side of it.

As luck would have it, the property owners association had already been looking into mitigating the erosion on the island in the course of renovating the adjacent Beresford Creek Boat Landing.

“It was wonderful to see how important that island is to the community and to the children of Daniel Island,” said Vice President of Community Services for the Daniel Island Property Owners Association Jane Baker. The project involves placing articulated concrete block mats along with planted seagrass on the bank of the island and on the sides of the boat ramp to stabilize the shoreline. It is being carried out by Cape Romain contractors.

The City of Charleston also has a project in the works to restore part of the island’s shoreline along the Wando River. The project will create about 500 linear feet of rock buffer along the shore of the pedestrian trail along the Wando River near the Daniel Island Children’s Park. The area in between the rock buffer and the shoreline will be back filled and planted with marsh vegetation. (Credit: Daniel Island News) 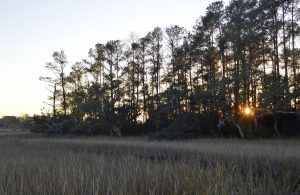