The reincarnation of Cainhoy Plantation: Part 1 – The development plan:

The Daniel Island News is preparing on the new Cainhoy Plantation community, a 9,000 acre tract that is now in its beginning stages of development. In future issues, we will explore the environmental factors influencing planning for the site, including new details on a proposed 500-acre conservation sanctuary to be located in the heart of the new community, as well as other topics related to the project.

The late Harry Frank Guggenheim reportedly once noted that of all the places he was able to go in his lifetime, Cainhoy Plantation was his favorite.

Today, the vast swath of land that he loved, all 9,000 acres of it, remains largely the same as when he first purchased it for recreational use, farming and timber production in the 1930s – a verdant eco-rich wonder sprinkled with forests of loblolly and longleaf pines, pristine wetlands, towering ancient live oaks, Colonial-era trails, and breathtaking views of tidal creeks and rivers.

In the decades that followed, Guggenheim often spent time here with his family, friends and business associates – including famous aviator Charles Lindbergh and World War II general James Doolittle – hunting, celebrating the holidays at the plantation’s lodge, and enjoying the outdoors.

His younger cousin, Peter Lawson-Johnston Sr., inherited the property in the form of a lifetime family trust after Guggenheim’s passing in 1971. The mammoth parcel, which spans from the Wando River to the Cooper River on the Cainhoy Peninsula and borders the Francis Marion National Forest on its northeastern side, remains in the Lawson-Johnston family today.

The family knew members of the development team at the Daniel Island Company well – as the company created the present day Daniel Island community on land formerly owned by the Harry Frank Guggenheim Foundation, which funded the island’s original master planning. A separate entity, known as the DI Development Company, headed by Daniel Island Company President Matt Sloan, has been tasked with managing the creation of the new community. Plans for the creation of a planned unit development (PUD) at Cainhoy Plantation first went public in 2013, when the project was brought into the City of Charleston approval process pipeline. The developers asked for and received approval for a special zoning designation, as opposed to the previous general zoning, to allow them to create mixed use development within the plantation tract, similar to what is found in the Daniel Island community.

Some four years after the PUD was first introduced, plans are well underway now to keep the project on track. The development team is about to start the environmental permitting stage, after conducting important studies of natural and cultural resources, said Sloan. And a subdivision plan for the first residential neighborhood, to be located adjacent to the Philip Simmons Schools, is currently in the engineering and design phase. That initial housing enclave is expected to include about 200 properties.

“This neighborhood could be ready for a ground break on site work by early next year,” added Sloan. “Which means families would have an opportunity to begin thinking about housing options in the near future…This is in a great location. It is kind of the epicenter of this property. It will be the spot where the greatest number of kids can walk and ride their bikes (to school).” So, in the midst of encroaching urban sprawl, the mostly unspoiled lands of Cainhoy Plantation rest for now, as progress beckons on the horizon. (Credit: Daniel Island News) 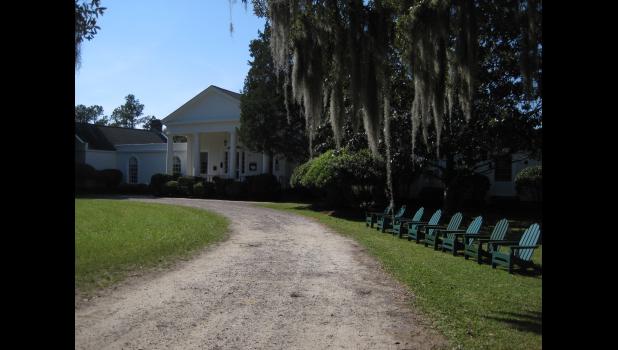