Daniel Island is getting a new, fully equipped $8 million community recreation center in Governors Park, courtesy of the City of Charleston, and it is destined to be abuzz with activity as soon as it opens. That much is certain.

Last week, city staffers revealed conceptual designs for the long-anticipated facility, which have been approved by both the City’s Design Review Committee and the Daniel Island Architectural Review Board. The renderings, were designed by Rush Dixon Architects and Seamon Whiteside.

“The architectural style is spot on for Daniel Island,” noted Jason Kronsberg, director of parks for the City of Charleston. “When they unveiled the plans, we sort of had this ‘ah-ha’ moment and said this feels really good.”

The current design for the complex includes a gymnasium, multi-purpose room, fitness room, offices, a meeting room, storage, a catering kitchen, restrooms and showers, and an outdoor yoga lawn. Daniel Island’s agrarian history was the direct inspiration for the design, explained Judy Dixon of Rush Dixon Architects. This type of architecture, pulled from agricultural roots, can also be found at the existing concession building at Governors Park.

“That history and context, plus understanding the fun and casual types of functions that are housed in this building really solidified this design direction,” said Dixon. “The building material choice and detailing are selected and will be designed to align with the quality level of Daniel Island and durability requirements of a public building.”

Three years ago, city staffers hosted a series of input sessions on Daniel Island and the Cainhoy peninsula to gather input on the types of parks and recreation amenities desired by residents. In all of those sessions, attended collectively by hundreds of community members, a new recreation center “was always front and center,” added Kronsberg.

Kronsberg and his team then sat down with the architects and came up with a program based on the city’s budget for the project, square footage, operational constraints, and lessons learned from other facilities.

“And then Rush’s charge was to kind of fit that all into an envelope (for creating) this great civic building that really says ‘Here I am…this is our city’s commitment to Daniel island and its citizens.’”

As per the Daniel Island Development Agreement, the city is required to start turning dirt on the project later this year. “We are on a fast track schedule because we have to break ground on this in September,” said Kronsberg. “So we are doing everything we can to meet that schedule…The site plan will develop over time…We have a lot to do on the landscape, but we feel pretty good about the architecture.”

“We have a lot of groups on the island – fishing clubs, garden clubs, sewing clubs, bridge clubs,” said White. “It will be heavily, heavily used space, so it would be good if we can find a way to have other rooms…We want to design these rooms with the ability to have multiple functions.”

The city will begin cost estimating on the suggested interior changes and determine if the footprint of the building can be adapted in any way, said Kronsberg. In the meantime, all continues to move forward to meet the fall groundbreaking deadline. Construction is expected to take about 12 to 18 months to complete.

“It’s a recreation center that will serve the community,” added Yarbrough, who said the facility will be staffed seven days a week. “And it’s going to be a very active site!” (Credit: Daniel Island News) 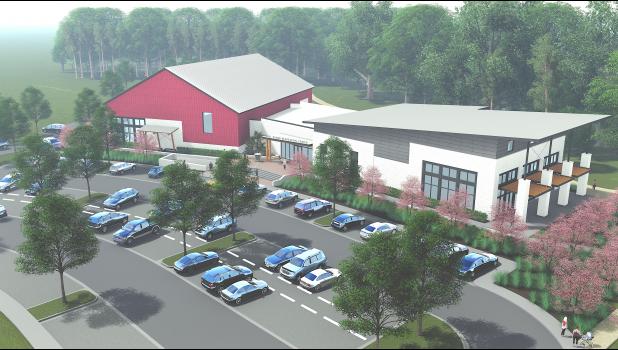