The six-acre parcel is currently owned by the Daniel Island Company and has always been earmarked for a city park, explained Kronsberg. As per a fourth amendment to the development agreement between the Daniel Island Company and the City of Charleston, approved by both parties in 2016, the property is expected to be deeded free of charge to the City if the City commences construction on the park by September of 2018.

City officials first unveiled conceptual designs for the park to area residents in October of 2017. Recently, Kronsberg, City Councilman Gary White, and Jane Baker, vice president of community services for the POA, met on the site again to review the final renderings.

“We came back to the neighborhood about a week ago with the latest rendition of the plan, which is very similar to the concept we initially presented,” said Kronsberg. “Right now, we are finalizing our bidding on the trails and a small parking area.”

The City already has contracts for a planned gazebo structure and playground equipment, added Kronsberg. Those components were approved by City Council at their August 21 meeting.

“We are well on our way to start the project in the next month or so,” he continued. “The goal is to break ground at a similar time as when we break ground for the Daniel Island Recreation Center.”

Designs for the new amenity were based on input from the community, noted Kronsberg, and the nature of the park itself. The City is using in-house designers and a staff landscape architect to develop the plans. The space’s natural, pastoral setting gave the team a good framework from which to begin designs. 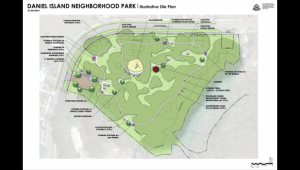