With the perfect outdoor season finally upon us, it’s time to get back in the open air and explore nature. In honor of fresh air, grass, wildlife, and warmth, The Daniel Island News compiled a comprehensive list of state and county parks located along the Carolina coast. Below is the name of each coastal county, how many parks they have, and a little bit of information on the most interesting offerings. The first three parks listed are popular Daniel Island spots that are set for updates and further development.
DANIEL ISLAND PARKS
Waterfront Park: One of Daniel Island’s favorite spots for kids, Waterfront Park (near Children’s Park) will soon undergo some upgrades. The Daniel Island Property Owners’ Association (DIPOA) hopes to make renovations to the public dock for more water sports. That plan is currently in permitting, and Vice President of Community Services for the DIPOA Jane Baker noted that the design for the park improvement is roughly 80 percent complete. An enhanced waterfront trail will have new additions, like better lighting, additional seating, and more play opportunities for children. “We did want to step it [the trail] up,” commented Baker. “[We wanted to] make it a more usable place for residents and visitors, alike.” If the permitting and approval phases go as planned, Baker believes the entire project will be complete by 2019.
Guggenheim Park: As opposed to Waterfront Park, Guggenheim Park is set for construction. All permits have been approved and a ground-breaking is expected to take place at the end of the summer. The project is projected to finish in winter of 2018 or 2019, said Baker. The improvements to Guggenheim Park include new fountains, new seating, new lighting, and new landscaping. “It’s really going to be the new central park for Daniel Island, I think,” added Baker. The park is expected to host regular events and a farmers’ market.
New recreation area: A set of new sports fields planned for the southern side of the island is currently in the early stages of development. The DIPOA is subleasing a little over 50 acres of land to three nonprofit sports program providers: Lowcountry Lacrosse, Daniel Island Soccer Academy and The Battery Foundation. These three recreation organizations will develop soccer and lacrosse fields in the area. “We look forward to those organizations to be up and running probably next fall,” said Baker. The Daniel Island Company will then build a better paved access road to the field area. The recreation area will be available to the public when not in use for sporting events.
Land leased by State Parks, Recreation, and Tourism Department: As previously reported in The Daniel Island News, a 50-acre section of land owned by the State Ports Authority on the southern end of Daniel Island was subleased to the South Carolina Parks, Recreation, and Tourism Department (SCPRT) in 2015. Director of Corporate Communications Dawn Dawson-House said that there are no plans for the immediate future in terms of developing the property for public use. According to Dawson-House, SCPRT is waiting for surrounding development to take place before moving forward. 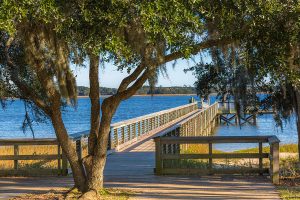