Over several decades, developers plan to transform the private plantation, Cainhoy Plantation, into a mixed-use community with thousands of homes; three public schools; and new shops, restaurants and office buildings.

Former Charleston Mayor Joe Riley, who annexed land throughout the region during his 40 years in office, brought Daniel Island into Charleston’s oversight — and onto the city’s tax rolls — in 1993, followed by Cainhoy in 1995. Both tracts had been bought by American philanthropist and businessman Harry Frank Guggenheim in the 1930s and 1940s. Guggenheim left Cainhoy Plantation to a nephew, Peter Lawson-Johnston II, in a trust in 1971. DI Development will manage Cainhoy’s development.

City leaders approved zoning of the Cainhoy property in the 1990s, but Sloan said it was too far-reaching for a property of this size, and he sought new zoning. The city approved a planned unit development in 2014 that allows office, residential, retail, industrial and schools.

The zoning of the 9,000-acre plantation allows 2.1 units per gross acre. In-depth study of the Cainhoy property led to a decision to build a maximum of 9,000 homes over time. The project also will include commercial and retail developments, schools, green spaces and a nature sanctuary. More than half the land will be preserved as natural space, protected from development. Sloan said the Cainhoy community will be built slowly, over several decades.

Of the 9,000 acres at Cainhoy, 4,500 acres will be designated for mixed-use developments, with about 1,000 acres of that land set aside for parks, trails, lakes, wetlands and open spaces. The remaining 4,500 acres will be protected from any development, remaining as natural open space, woods or wetlands. This includes a 500-acre nature sanctuary designed to protect wildlife and plant species.

DI Development will sell parcels to builders and developers over the next several decades to build neighborhoods, retail centers and office buildings. Residential neighborhoods will be built throughout the property. The existing plantation roads will be turned into walking and biking trails, connecting neighborhoods, natural areas and historical points of interest.

Planners see Clements Ferry Road as the main commercial hub, building off existing businesses and heavy traffic. Cainhoy Road, which Sloan originally thought would be the community’s employment and industrial hub, will instead remain rural to create a buffer between the new developments and the Francis Marion National Forest.

Initial construction has started on one side of Clements Ferry Road. Newly paved roads and roundabouts with landscaping and sidewalks lead to large clearings. Three new schools stand in the openings — a campus built out of the woods.

Other construction plans are in the works. Publix recently signed a lease to anchor the 90,000-square-foot Point Hope Commons retail center in the Cainhoy community. The first residential development is in the design stages, and work on those homes is expected to begin in 2018. 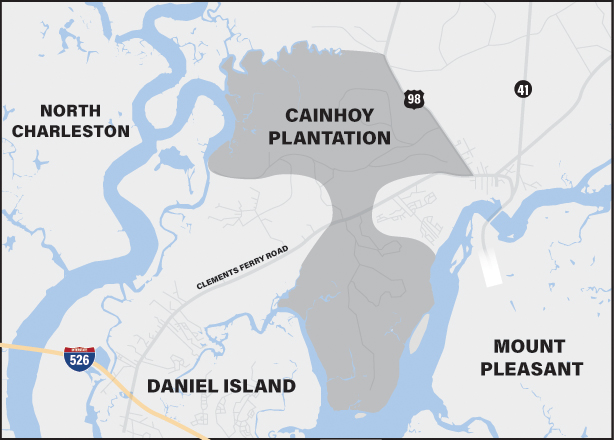