The Daniel Island Ferry will offer monthly commuter and family passes through a subscription service, but riders will also be able to log into an app to schedule individual trips as well. They hope to do two early morning commuter runs, a regular daily service, two later commuter runs, and evening rides.

“It’s just another way to get around – and it’s a lot of fun,” added Hollifield, a co-partner in the water taxi service. “It’s a completely different vibe. You get on the water for just that 30 minutes and you’re relaxing!”

Ultimately, the Daniel Island Ferry will stop at two locations downtown – the City Waterfront Park and the Charleston Maritime Center. The service will kick off during the upcoming Volvo Car Open and then will run for special events, but full daily service will have to wait until planned construction by the Daniel Island Town Association on a new waterfront dock near Children’s Park is complete.

“That’s the variable that nobody knows,” Hollifield added, referencing the dock construction timeline. “We’re planning on starting by the end of the year.”

The partners have also ordered a new boat for the Daniel Island service that will be climate-controlled and a bit wider than those in their current fleet. In addition, it will also feature bike racks for riders who want to bring a bike downtown to get to and from work or other spots. As they wait for the dock work to get underway, the Daniel Island Ferry team plans to survey residents to determine the best pricing and packages for the service. By all accounts, the island community appears ready to dive in to the new concept. 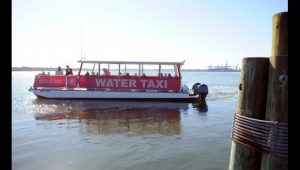