Standing in a peaceful glen in Daniel Island Park last week, at the base of a stately, centuries-old live oak, Charleston Mayor John Tecklenburg, Councilman Gary White, and other city staffers unveiled designs for what they hope will be a new neighborhood park at the site for all to enjoy.

Councilman White kicked off the session by explaining how the process to add the island’s newest park amenity got started. He and a small group of his Daniel Island Park constituents began meeting about six months ago to discuss what should be done with the scenic space along Island Park Drive near the Daniel Island Club golf maintenance building. Utilizing community feedback, White, Mayor Tecklenburg, City of Charleston Director of Parks Jason Kronsberg, and members of the city’s Civic Design Center started to formulate a plan.

“We said here’s what we think the community would like to see,” said White. “And then Jason and the Design Center really took it from there and started building out what this could be, what we could put here that would allow it to be a passive park, a usable park, but also a really nice amenity to the community. That’s what led us to this point today.”

The six-acre parcel, currently owned by the Daniel Island Company, has always been earmarked for a park, explained Kronsberg. As per a fourth amendment to the development agreement between the Daniel Island Company and the City of Charleston, approved by both parties in 2016, the property would be deeded free of charge to the city if the city commences construction on the park by September of 2018.

“What it did was it resolved commitments that had been made by the city over 20 years ago about the park system and what was going to be provided by the city and what was going to be provided by the development company,” explained Tecklenburg. “And what happened over time was the city ended up spending more money than they committed to to begin with, and so there was just this bit of negotiation I guess you would say in coming to that fourth amendment and this park was part of that negotiation.” “We don’t have to pay for the land,” added White. “But we have to make the financial commitment to build the park. The land just gets deeded to us.”

While a time frame for completion and total estimated cost have yet to be determined, as per the development agreement the city must spend at least $500,000 on the project, explained White. If the park obligation is not met by the city, the Daniel Island Company would be free to use the land however they see fit, stated Jane Baker, vice president of community services for the Daniel Island Property Owners Association. “If the city chooses not to build a park, Daniel Island has the right to build here if they would like to,” said Baker, who also attended last week’s event. “If that’s what we’re hearing from the mayor, that they’ve got a commitment to build the park, then that goes away.”

“We have a commitment to do it,” added Tecklenburg. “…I believe our efforts here with planning, which we would continue to do, would show (them) that we are well on the way.” Kronsberg displayed two large boards at last week’s session depicting potential landscape designs for the new park, which would feature what he described as “a light footprint.”

“What we looked at with the drawings was a very simple program of a looped trail system, possibly a central gazebo or gathering place and maybe a playground…(with) maybe little exercise stations along the way,” added Kronsberg. “The lightest footprint is probably the best in this case, because the trees and open space are really what this is all about.” “From my perspective, it’s terrific,” said community member Dave Iauco, addressing the planners. “The more natural the better as far as I’m concerned. I think you’ve got some great ideas there and I look forward to it.”

All in all, the designs met with rave reviews from area residents.

“We sometimes do capital projects by bond funding,” said Tecklenburg. “And it may not be in our overall general fund budget for 2018, but we’re going to have to rely on a bond in order to complete the (Daniel Island) community gymnasium down at Governors Park next year and I would view that to be a ‘recreation and parks’ bond that will include some other facilities around the city. And in fact, this may get included in that.”

The city sees the new amenity as a way to complete the park system on Daniel Island, noted Kronsberg. For Mayor Tecklenburg, the park will provide a lasting legacy for the community. “This is kind of a bonus really of what the city had agreed to years ago,” he said. “…It would just be a shame to let this opportunity pass us by…It’s just the right thing to do.” (Credit: Daniel Island News) 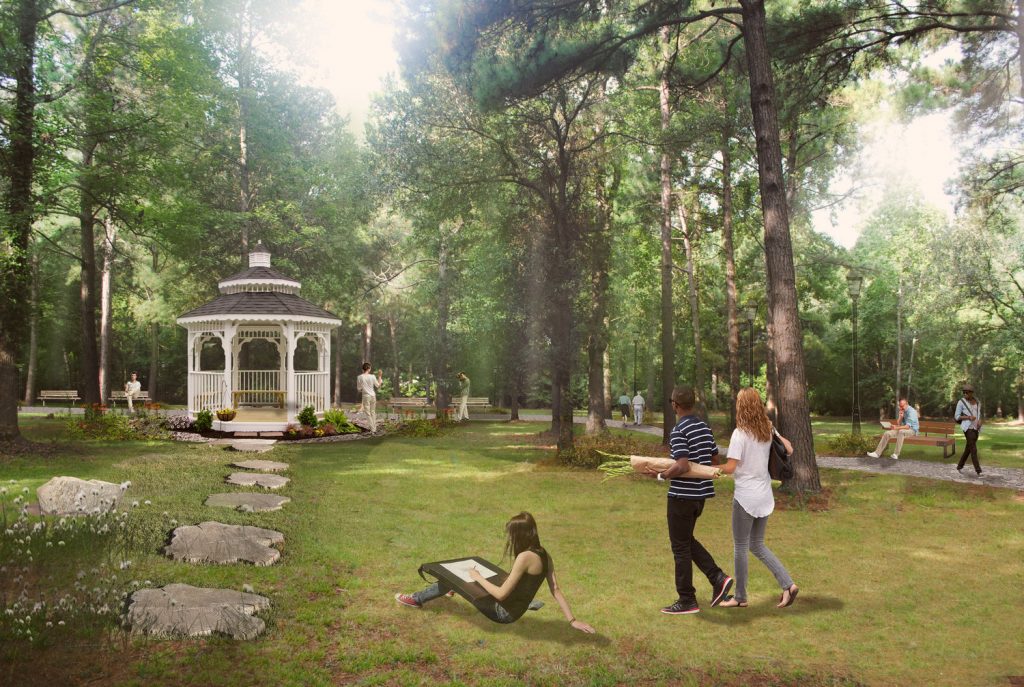