If you’ve ever wondered what’s in the pipeline in terms of future Daniel Island development, the meeting of the Daniel Island Neighborhood Association was the place to be to get answers. There were many topics to cover – but the announcement making the biggest splash on the evening’s agenda had to do with the community’s waterfront access. MARINA PLAN SCRAPPED, NEW ‘VILLAGE CENTER’ CONCEPT INTRODUCED “We’ve been trying for as long as I’ve been here…to activate the waterfront down the Wando River at the end of River Landing Drive,” explained Sloan. “This is the first time we’ve talked publicly about it, but I think we’ve come up with a solution.” Sloan went on to explain that original plans for the area near Children’s Park called for a large scale marina, complete with a multi-level dry stack boat storage facility. The developer had hoped the project would provide the spark needed to get some retail development underway on the site. Some 15 years later, after getting the project permitted and designed, Sloan said he and his team learned the hard way that it didn’t make economic sense. “And the reason it doesn’t, for those of you that boat, is the wind-wave action coming in from the northeast is such that (the area) needs a giant breakwater around it, which makes the project really financially unfeasible,” he added. Add a dry stack building that would require almost a 700 foot runway to get boats out on forklifts and you’d have what Sloan described as a “parking lot for boats.” “If you’re not a boater, it wasn’t really offering that much value for you,” he said. So the developers went back to the drawing board and came up with what they hope is a win-win for all – a new “Village Center” for waterfront activity that includes two additional public access piers, a pocket of about 300 condominium units broken down into smaller buildings (similar in scale to other structures in the area), enhancements to Children’s Park and the waterfront area, and new retail opportunities.

At this point, the revised initiative is still preliminary, noted Sloan, but the Daniel Island Company hopes to introduce the idea to City of Charleston planners within the next couple of weeks. “It’s a pretty innovative concept,” said Sloan. “We’re working with a very, very high quality developer called East West Partners. Projects they have done locally include One Vendue Range, and the last buildout of the Tides Condominium project in Mount Pleasant. Nationally, they are known for high quality developments in Vail, Beaver Creek, Deer Valley, Lake Tahoe, and Hawaii. Additional waterfront enhancements for the area include a plan to spruce up a thin strip of land along the edge of the Wando River. That property will soon be placed under control of the Daniel Island Town Association, as per a 2016 amendment to the Daniel Island Development Agreement with the City of Charleston. “(It’s) a nice little path right now,” said Sloan. “But it was never designed to be a park. It’s not irrigated, it’s not graded. It was just an interim use, so that’s going to become a permanent facility before long.” In addition to extra parking, the overall plan also calls for new dining options. “…I am hoping that we’re going to be able to put at least one maybe more cool restaurants on the water’s edge and make that into a destination that people can arrive at by land, by foot and by water.”

Sloan touched on several developments planned for the town center area, including the Daniel Island Performing Arts Center, a new office and restaurant/brewery space, Starbucks, and Bin 526, as well as the Central Island Square project currently underway on Island Park Drive. “The whole frontage there has some really neat retail space,” he said. “They haven’t announced tenants yet, but I think they are working on some things that will be wonderful additions to the community.” He also noted two new properties under construction for seniors in Daniel Island Park – an independent living facility (Daniel Pointe) and an assisted living facility with a dementia care unit (Wellmore). A Farr Street senior apartment community known as “The Overture” is also in the works, after being redesigned with community feedback in mind, said Sloan. A parcel adjacent to the site has been earmarked for 10 townhouses and three single family lots. Developers expect to break ground in the fourth quarter of this year. A new collection of 90 homesites on Rhoden Island in Daniel Island Park will likely open up in 2017, noted Sloan. The 90 acre island, accessible by a bridge over Ralston Creek, is a “special piece of property,” he added. “It was an old timber property, but hardwoods still grow within timber tracks and we have an incredible canopy of live oak trees here and other desired tree specimens.” According to Sloan, the developer has saved 96 percent of grand trees and 99 percent of grade A trees on the parcel. “We’re very proud of this,” he added. “And we’re really looking forward to launching this (project). We’re going to do a designated marketing push on this…which will help drive interest to Daniel Island in general.”

Also noted during the presentation, was the finalization of plans for the island’s south side. Just north of the land owned by the State Ports Authority is a parcel of property set aside for recreational use that will soon be taken over by the Daniel Island Town Association though a long-term lease with the City of Charleston. “We’ve lined up three recreational providers that want to be there,” said Sloan. “A permanent home for the Daniel Island Soccer Association, Lowcountry Lacrosse…and then another soccer program hopefully run by the Charleston Battery…and all of these groups have agreed to work together and help each other out and provide some synergy. It’s a big addition to the community.” TRANSITIONING POWER In just two short years, the Daniel Island Community Association (DICA) is expected to become resident-led as opposed to developer-led. The shift, as explained by Sloan, will come when the island reaches 75 percent of its projected build-out of homes. The island, zoned for 7500 homes, is presently at 5135, he said, but they expect the build-out to be complete at 6350. A DINA transition team is already at work preparing for the change-over. The transition will occur in 2025 for the Daniel Island Town Association and the Daniel Island Park Association. 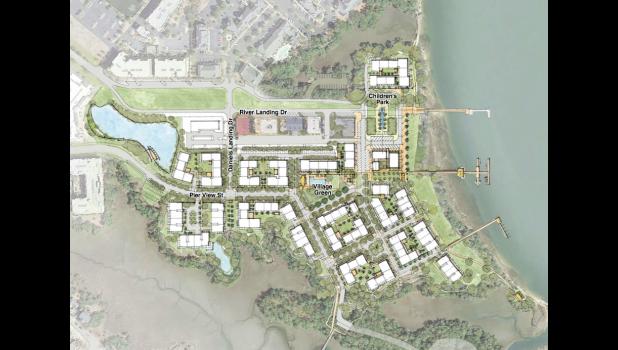