Completed in April 1999 as Blackbaud Stadium, MUSC Health Stadium is the first privately funded soccer-specific stadium constructed in the United States during the modern era. Styled after the classic English soccer experience, the stadium seats 5,100 and offers fans an unmatched environment with superb sight-lines, concessions, and even a plush English-styled pub.

The stadium is home to the second-largest video board in the Southeast. MUSC Health Stadium’s jumbotron is 3,000 square feet. When comparing the square footage to stadium seats ratio, the video board is the largest in the world.

Additionally, the complex includes sky boxes, a plaza for corporate entertaining, and state-of-the-art media capabilities, making it one of the premier professional soccer venues in the U.S. The MUSC Health Stadium complex also includes gym, athletic training facilities, practice field, and the offices of the Charleston Battery.

Located immediately behind the stadium and completed in 2008, the natural-grass first-team practice field was designed to replicate the playing surface on the Charleston Battery stadium pitch.  Surrounded by woods, marsh and a landscaped pond, this field is also used for a variety of additional events, including corporate parties and as a VIP area during stadium concerts.

In addition to soccer games the stadium is a hub for the community and is donated for a wide variety of charitable and philanthropic events throughout the year. MUSC Health Stadium is also a major concert venue in the Southeast and has been the site for various musical events, including the annual Southern Ground Music & Food Festival featuring Zac Brown Band. 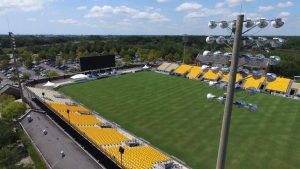