Daniel Island Race for the Cure a Success 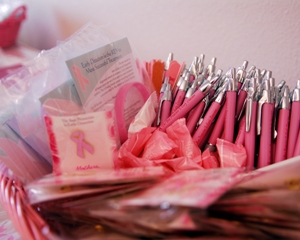 This past weekend, Daniel Island hosted the 18th annual Susan G. Komen Lowcountry Race for the Cure, a 5K run / walk to support breast cancer research, education, screening and treatment programs. The event is held in dozens of cities across the country. This year, 11,000 racers participated in the Lowcountry event, raising just under $1 million for the cause. The event raised $860,000 in 2010.

The main pre-race concern was in logistics: because the Mark Clark Expressway (Interstate 526) is the main route into Daniel Island, the influx of visitors to the island for the race has historically caused the expressway to come to a halt, delaying the arrival of many racers. This year, the problem was addressed with the use of shuttle busses. Racers boarded the shuttles in Mount Pleasant at the Towne Center shopping center parking lot and in North Charleston at the Tanger Outlets parking lot. The free shuttles began running at 6:15 am and were a success.

The 5K race began at the corner of River Landing and Seven Farms Drives and followed Daniel Island Drive to Purcell Lane, continued down Pierce Street to Mitchell Wharf Street and made its way back up Pierce Street to finish at the Family Circle Tennis Center.

On Sunday, October 23, area Lowcountry churches will be participating in Pink Sunday, which is a community outreach program heralded as a day of empowerment, celebration and praise, to raise awareness about breast cancer. And in February, the SC Stingrays professional hockey team will host a Pink in the Rink event. More information on these and other events can be found at komenlowcountry.org.