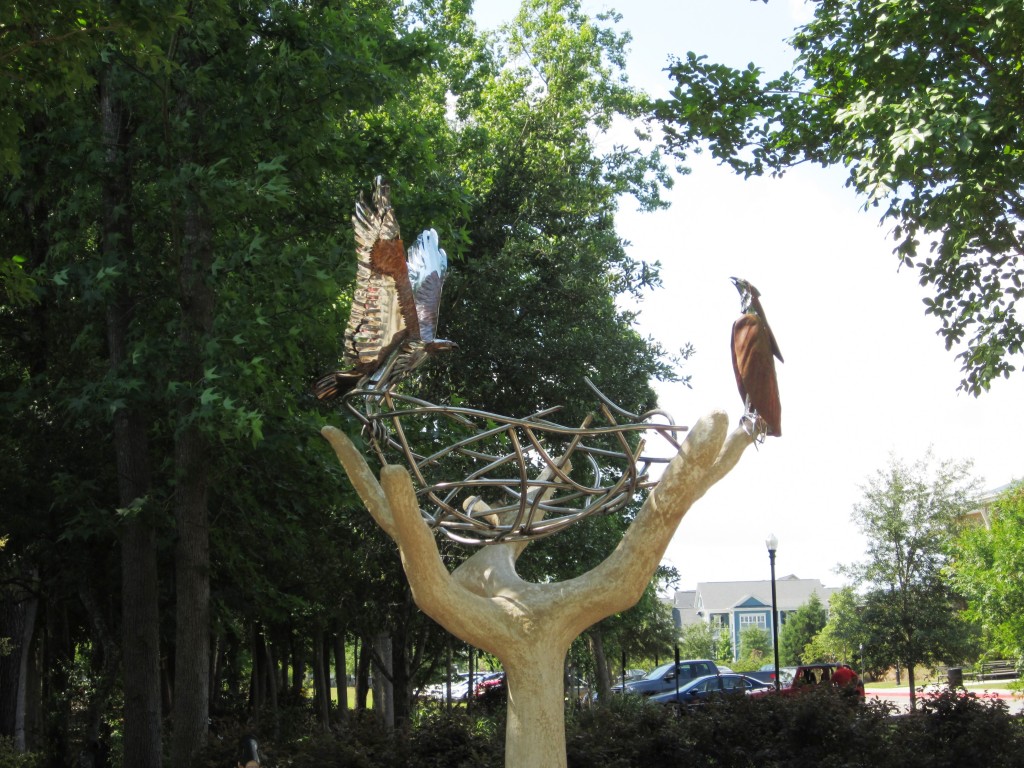 It’s been three years in the making. What began as an undeveloped wooded area in front of the Daniel Island School (a Berkeley County elementary school) has been transformed into a peaceful and educational two-acre walking trail. Nestled among Daniel Island’s many other parks and recreational facilities, the Osprey Trail is a bit of a hidden gem created with love by the Daniel Island Garden Club. Since the inception of the trail in 2008, the club has worked tirelessly to raise funds for a piece of artwork that would serve as the trail’s focal point. All that hard work culminated on May 11, 2012 — fittingly on Mother’s Day weekend — when an 11-feet sculpture was dedicated. The coper, steel and cement sculpture depicts a pair of nesting osprey in a tree and is quite a fitting centerpiece for the trail, which sits in front of an elementary school whose mascot is an osprey. 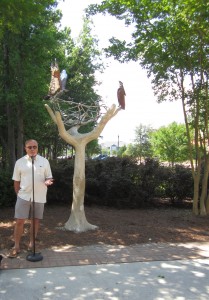 The ceremony was part art dedication–part nature talk as sculptor David Springer told the audience about the first time he saw an osprey catching a fish and how that had inspired him ever since. Entitled Island Sonata, the sculpture for the Osprey Trail was created in Springer’s Park Circle (North Charleston) studio, and the artist installed the 11-feet-tall, 350-pound sculpture himself. It is designed to stand up to time and weather — and is hurricane-proof. Osprey are sited around the Lowcountry with some frequency because of our expansive marsh and wetland habitats, and according to Springer and several audience members, ospreys have been sited throughout Daniel Island, Mount Pleasant and North Charleston.

One of the many things that makes Daniel Island so great is its well-thought-out parks. The walkable community has so many wonderful outdoor spaces and the Osprey Trail is no exception. If you are going to be on Daniel Island either for an event — such as the Moms’ 5K Run and Family Fun Day on Saturday, May 12, 2012 — or if you are hunting for real estate, I highly recommend you stop by the trail. It is in front of the Daniel Island School and across from the Berkeley County Library. The trail includes several themed gardens with plant species carefully labeled. Beginning with the Woodland Shade Garden, the gravel trail continues on, meandering through the Southern Garden, a gorgeous Rose Garden, the Bird and Butterfly Garden, the Children’s Garden and finishes with the stylized Japanese Garden — a community favorite.

The Osprey Trail is located on Daniel Island Drive between Barfield Street and Purrcell Lane, as indicated by the map. 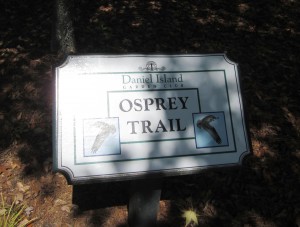 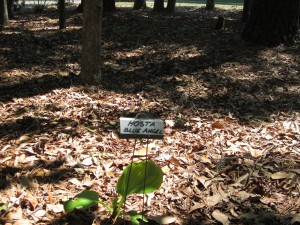